I’ve been looking for some really light games, ones that don’t suck up too much of time and are yet fun to play. I’ve already played the standard games you usually play on Linux: TuxRacer, BZFlag, Neverball, Armagetron AD, Frozen Bubble, Battle for Wesnoth, Pingus; and DotA was getting a little too heavy. I highly recommend these games if you haven’t played them, by the way.

I was reminded of the Win’ 95 days (my first computer) - we used to have a lot of great DOS games back then which had no eye-candy, but great gameplay. After a little Googling, I came across DOSBox, and its smooth OS X wrapper, Boxer. DOSBox is an emulator that can be used to play DOS-based games - neat, eh? I managed to get some of my really old favorites: Bio Menace, SkyRoads and Major Stryker. I used to play shareware versions of Apogee games before, but was really happy to know that Apogee (now 3DRealms) released full versions of Bio Menace and Major Stryker for free (as in beer). SkyRoads is also put up as a download on the creator’s website. Yay, now I can play those fun-filled levels that were previously hidden to me: 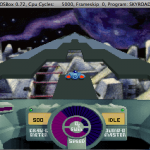 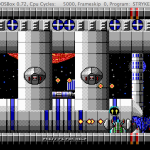 While we’re on the topic, I should also mention Alex 4. Alex the allegator is a series of games by Johan Peitz (of Free Lunch Design fame - I still can’t forget Icy Tower!). The Alex series is special in the sense that the source is also available (it’s written using Allegro), so it has been ported to Mac OS X and BeOS.