I needed a decent UML modeller that was capable of converting my class diagrams into PHP 5 code. I usually use ArgoUML on my Mac; it’s a great product but lacks the code-generation feature that I needed. (It does generate C++ and Java code though). (EDIT: As noted in comment below, ArgoUML indeed supports PHP code generation as a seperate module!). So I rebooted into Linux and emerged Umbrello. However, I had heard about the Qt/Mac edition, which is essentially Qt4 but with a native Mac interface. I was very tempted to try this out - KDE 4 without X with a native Mac look is absolutely exciting!

Check out this yummy screenshot (click for the full version): 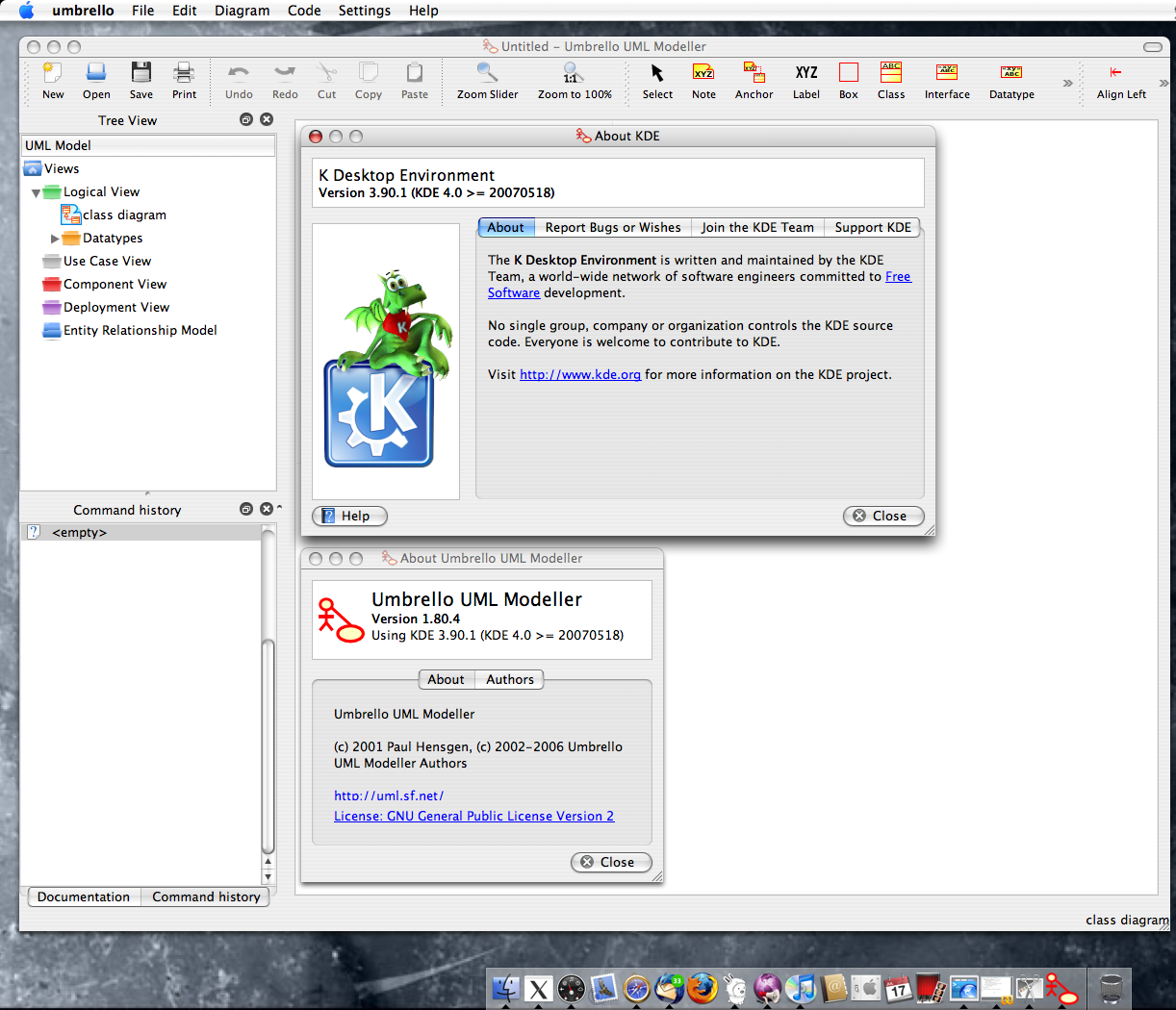 That’s Umbrello on Mac OS X, complete with an Apple style menu and a Dock Icon! Read on for compilation instructions…

This page provided lots of useful info to get started. I downloaded the Qt/Mac Open Source edition, version 4.3. After applying the patches mentioned in the KDE for Mac OS X build page (not all of them applied cleanly, but I guess those patches were for a older version of Qt) I began compiling Qt. Here are the exact steps:

Note that you need DBus installed before you try this. I highly recommend MacPorts for all you Mac OS X users out there, its chock-full of useful open source software for your Mac. port install dbus to get Dbus. Qt took about an hour to build on my Macbook Pro.

Now onto KDE 4. All of the pre-requisites mentioned on the KDE 4 for Mac OS X page can easily be got through MacPorts - with the exception of Strigi. You can easily build Strigi from source though, make sure you get a recent SVN checkout. Strigi depends on CLucene, there’s a version in MacPorts but it’s not new enough for strigi. Anyway this wasn’t so difficult either:

Now, we’re all set to build the base KDE libs:

Voila! All done. Now you can build your additional KDE components quite easily. Umbrello, for example, is part of kdesdk, which depends on kdepimlib. To build Umbrello:

Now just run Umbrello.app from /opt/kde4/bin! It may fail the first time you run because you haven’t initialized DBus yet:

Have fun! I’m going to try and build Amarok now!